WE WERE ALLOWED TO BE KIDS — NO KIDDING!

You’re sharp.  Yup.  This is about us ‘Boomers when we were young’uns.

If you were born after the 60’s and can’t fathom a life without a video screen in front of your face and earbuds surgically implanted, go ahead.  Shake your head at the pathetic grey-haired (okay, tinted or outright dyed) Ancient Ones.  Sit right beside one another ignoring your actual friends while texting someone in Illinois.  Or Hong Kong. 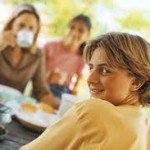 We still like the way we grew up.   If you’re one of us, grab  some java.  Otherwise, do some Red Bull or all that other synthetic stuff you use to wake up.  We always used roosters . . .   Lemme tell ya about it . . .

First, we survived being born to mothers who probably went right on with bad habits while pregnant.  They took aspirin, ate bleu cheese dressing, tuna from a can–and never got tested for diabetes.  Or other stuff.

After that trauma we were put to sleep on our tummies in baby cribs covered with bright-colored, lead-based paints.  We had no childproof lids, no locks on doors or cabinets.  And when we rode our bikes we wore baseball caps, not helmets.

As little kids we would ride in cars with no car seats, no booster seats, seat belts or air bags.  Well, there might’ve been some in the car we thought might qualify, but we knew better than to say it.  And those cars often had bald tires and not the best brakes.  Radios and electric windows were luxury items; we thought we were big stuff if allowed to roll down our own window.  And, hey–riding in the back of a pickup truck on a warm day?  It didn’t get any better’n that!

We drank water from garden hoses, not water bottles.  If we had pop, we shared one with four or five friends.  From one bottle.  Glass.  And nobody actually died from this.

We snarfed sweets, white bread, real butter, and bacon.  Lots of bacon.  We drank Kool-Aid made with real white sugar.  And we never, ever were overweight.

Why?  Whaddya mean, WHY?  We were always outside playing, that’s why!  We’d leave home in the morning and play all day.  We were fine as long as we hit the front porch when the street lights came on at dusk.  We were out of contact all day–and we got along just fine!  Okay–truth?  Somebody’s mom always was keeping an eye on us.  They always knew where we were, based on whose kitchen we’d most recently raided for snacks.  Eyes in the back of their heads?  Oh, yeah.

We’d spend hours building go-carts out of scraps of lumber and old wheels.  Then we’d ride ’em down the hill.  After a few, ah, spectacular and unscheduled dismounts we even learned how to make brakes.  Nobody whimpered about a banged-up elbow or skinned knee.  We figured those were signs of honor. 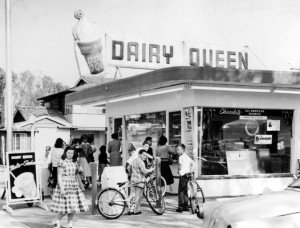 We didn’t have Playstations, Nintendos or Xboxes.  No video games, no bazillion cable channels, no DVD movies with surround-sound, no CDs, cell phones, personal computers, chat rooms or even the Internet.

WE HAD FRIENDS.  We went outdoors and found them.  Then we went and climbed trees, got cut and skinned up, chipped teeth and broke bones–and there were no lawsuits.  They were accidents and we all accepted that.  We figured those were signs of honor.

Spankings.  We got ’em.  Wooden spoons, switches, ping-pong paddles.  Sometimes even a work-hardened hand.  No one called child protective services.  It’s what helped set us straight and taught us what we could and couldn’t do.  Those lessons helped us become responsible adults.  Some of us still are working on that, but it helped.

We ate worms and mud pies.  No, the worms never lived forever inside us.  We got BB guns at 10, .22s at 12 and lessons on how to use them.  We rode horses, made up games with sticks and whatever balls we could find.  And even though we were sternly warned, we never put out very many eyes.

We rode our bikes or walked to a friend’s house, knocked on the door or rang the bell, and then walked in and talked to them.  Walking.  And talking, like, face to face.  Who knew?

Little League had tryouts and not everyone made the team.  Those who didn’t learned to deal with disappointment and the resolve to make it next time, while cheering their team on.

We knew better than to mouth off or act out in class.  Our teachers had paddles hanging on their walls that bore mute testimony:  they, not us, were firmly in charge of that classroom–and all of us.  Mess with them, we found ourselves sideways with teacher, principal and parents.  Those were never good days.  We learned to limit them.  We were taught the difference between good guys and bad guys.  Sure, the shows were simple compared to what’s served up now on cable–but the point was clear.  And we grew up understanding it.

The concept of a parent bailing us out if we broke the law was alien to us.  They–why, they actually sided with the cops!

The past 50-70 years have produced huge changes, invention, innovation and great new ideas…  It’s been interesting to observe.  But don’t lose sight of this fact:  our generations have given our nation and our world some of the best risk-takers, problem-solvers and inventors in all of earth’s history.

Freedom.  Freedom to fail until we figured out how to succeed.  Then recognizing the responsibility to wisely handle that success, learning how to deal with it, how to best use it and pass it on to you.

So–if you’re a ‘Boomer, you’ve already been nodding.  Sort of makes you want to run through the house with scissors, doesn’t it?  We managed to get a LOT done with what now looks like a beginner box of LEGOs.

But just remember, young one smirking back at us.  For our time, what we had was state-of-the-art.  And most of it wasn’t handed to us.  We invented it.

Here’s to you, you fantastic people who are turning 60 and older.  This was an amazing time to grow up.  And you are still an amazing bunch of people!  Ah, the memories we’re still creating!

No matter how brilliant the kids are, THEY never had Rat Fink!