“What’s on this monitor?” 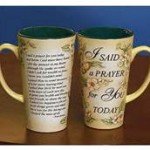 If you know me, you know I prefer order to disorder.  Clean to grubby.  Like that.

The computer monitor on my desk was not clean.  There were a series of more-or-less round, gunky, oily places in haphazard spots on the left upper quadrant of the monitor.

Dognose?  Marko’s not that energetic, but Buddy II?  Especially where there might be nom-noms involved?  In my office nom-noms are a given.  Despite the closed door the more-or-less round, gunky, oily places continued to appear.  Hmm.  Wonder if the aliens who get such joy out of leaving designs in wheat- and cornfields moonlight?

The mystery continued to nibble at my awareness like a mouse hunting for bagged tortillas on the counter.

Then one day as I finished praying during quiet time I stopped moving my arm in mid-motion, hand frozen in place about 5 inches from my monitor.

My eyes went from my left hand to the more-or-less round, gunky, oily places.

I receive a lot of requests for prayer cover.  Those requests are often from somewhere distant and about someone a long way from here.  Sometimes the requestor and the need are also separated.  But whether far or near that need is never right here in my office.

My response is the same.    When I stop to pray, often the closest link I ever have with that person is my computer.

Somewhere, sometime in a galaxy far, far away I began the habit of reaching my left hand and touching the monitor screen as I pray over that person and about their need . . .

Those more-or-less round, gunky, oily places are right where my fingertips reach out and ‘touch’ the person(s) or situation(s) about which I’m praying.

Well, yeah.  I occasionally clean it off, wiping the latest collection of more-or-less round, gunky, oily spots off.  I don’t do it as often nor as obsessively as once I did.

That’s exciting and stimulates me to keep up the habit.

Not too many visit my office, so it’s likely you’ll never see the odd groupings of five more-or-less round, gunky, oily spots on my monitor.  I’ve no idea how many of you keep up with these posts; I know many read things but rarely if ever respond.

But if you ever do visit my office and share a cup of joe with me,  you’ll notice those odd little spots if the light hits just right.

What they mean is that I’ve been praying for you, friend.  I won’t stop.

I know what believing prayer can do.  I’ve felt it.  I live it.

Thanks, 2nd Cupper, for the privilege of lifting you and your concerns to God.