He could’ve oiled that hinge.  There were times the upper-register screeeeeee got on his nerves.  Then again, it was much more cost effective than replacing the defunct ringer just outside his door.  Studies have shown that squeeky hinges work just as well as doorbells.

He was lost somewhere Out There in thought, letting a powerful series of lyrics flood his soul with a wash of reassurance and healing energy.  “He never promised that the cross would not get heavy-y-y / and the hill would not be hard to climb / He never offered our vict’ries without fighting, but He said help would always come in time / Just remember when you’re standin’ in the valley of decision, and the Adversary says, “GIVE IN!” / Just ho–ld on, my God will show up, yes, and He will take you through the fire a – gain!”

“I know within myself that I would surely perish / But if I trust the hand of God I know He’ll shield the flames again!   A – gai-i-i-in– HE NEVER PROMISED THAT THE———“

Regretfully, he pushed the Mute button on his stereo’s remote.

“Granger?  Coffee on?”  Rhetorical question.  He knew Granger’s office usually had the aroma of this or that blend of joe wafting, playing tag with the dust motes riding the morning sun’s rays through the east window.

“Of course,  You know where the cups and goodies are.” 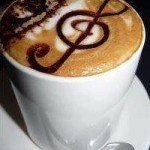 His eyes were already lasered in on the battered veteran coffeemaker, now burbling the last few drips of fresh medium blend.  As he settled into the Official Visitor’s Easy Chair his glance suddenly focused on the fire-engine-red coffee mug on Granger’s desk.

Maybe vat would be more descriptive.  It had “ESTd 1971 – STARBUCKS Coffee Co.”, which only made it resemble the old city watertower that used to stand out on Broadfield and 7th.  It was only slightly smaller.

He didn’t say anything, but his eyes flicked from low-beam to high-beam four or five times, flicking from the cup to Granger’s face and back.  Right on cue, the coffeemaker politely belched over in the corner.

“What WAS all that racket I heard from out in the hallway?  You’d never have let your kids have it up that loud—-”  Oops.  Granger’s eyes, usually mild, had a direct edge to them.  Reminded him of a new word he’d learned.  A lean, hungry tigress’s eyes would have an edacious look.  Not that Granger was hunting, but . . .

He took an uneasy sip, not used to the coiled light in his friend’s eyes.  “Mm.  Good.  What is it?”

Slight smile.  “Green Mountain Breakfast Blend.”  Granger’s eyebrows did that Golden-Arches thing that always meant ‘Go ahead’ or ‘What did you really want to say?”

He slipped back into the thought patterns of the morning.   A tensed and troubled look rearranged itself on his face.  Granger had noticed it more in recent days and knew something had been worrying his friend.   He sat silent.

“I’m having a harder and harder time dealing with ‘you-owe-me’ type of people.”  He paused, sipping from his Dopey mug.  For some reason he always chose it if it was clean.  “I mean, I know it’s my job to help people unravel the bureaucratic knots in getting the help and direction they need.  But there are some that no matter how much I work to assist them, it’s never enough!  They’re forever wanting more, accepting everything offered them as though it’s somehow their right; and they give the impression they’re doing ME a favor by allowing me to interact with their superior intelligence and social graces!”

Another sip and a glance at the seeming stoic Granger.  Reminded him of the Lincoln statue inside the DC memorial.

“You ought to see how some of them come in . . .  Some of them just always seem angry, just looking for conflict.  And if they can’t find any, they stir some up.  They have matched sets of chips on their shoulders!   Graces?  A lot of them have all the social acumen of—”  he stopped himself, being normally a gentleman.

“What were you about to say?”

“Sea slugs!  And too many of them look about that appealing, no offense to the slugs!”

He could tell his mentor and friend was collating thoughts, mulling over pre-considered ideas like hot apple cider trickling over cloves and cinnamon sticks.  He’d watched this process before.  Granger’s mind in mulling mode was nothing to mess with, striking very quickly and seemingly out of nowhere.

For some reason old clips of the Enterprise firing full phasers came to mind.  Whoa.  Focus.  He could feel Granger’s eyes on him.  This was going to be real good or real bad.

“Anything you want will cost you.  Anything.  The Publishers’ Clearing House approach to life, friends, relationships, job, education, career, your spiritual life, even personal issues is a fantasy.  And not a particularly good one.

“Whoever convinced you that you’d be a raging success by sitting and hoping somebody eventually sees how wonderfully brilliant you are?  No matter what you’ve been promised by anyone who collects money or votes by getting your support, you need to understand something.  In this life, success will NOT stalk you, assaulting you with wonderful blingy things and forcing fame and money on you against your will and despite your abyssmal lack of even the most basic of manners and public decorum!  NOT HAPPENING!

“Where did you ever get the notion that you’d become a smashing success by repeatedly conning enough good-hearted people out of their credibility and money until you got what you want?  I can tell you, it doesn’t work for long.

“Even the nicest, kindest people have their limits.  When they get fed up and get mad, it’s time to pay attention.  If you’re routinely, repetitively rude, caustic and disagreeable, why are you shocked when those you’ve systematically ignored and made fun of decide they’re done putting up with you?  When those whose decency and good graces you’ve privately trashed again and again finally have had all they’ll take and choose to put a stop to it?

“Oh, you’ll howl and scream and throw tantrums that you’re being offended.  It’s tough to listen to what needs to be said to you.  And to slightly paraphrase the emminent counselor John Wayne, it’s tougher when you don’t intend to listen.  The chances are you’ll hear it all again.

“On the front lines of today’s culture war, being INOFFENSIVE is king.  Stand for nothing, be a ‘null’ right along with the rest of the herd.  Think, say, certainly do just as everyone around you does.  Never stand out or up to be exemplary in anything.  Just play along and get along.  Be nice, play nice.

“What you don’t realize is that someone stands well back of the herd controlling what everyone else thinks, says and often does.

“There are times when enough is enough.  When nice, helpful people just like you” – he gestured with his deep red Starbucks pitcher – “suddenly grow fangs and put a stop to the self-absorbed, lazy silliness that has been passed off for far too long as factual, reasonable and true!”

Wow.  He expected an echo or at least a thunderclap.  After 23 seconds of swollen silence, he finished racheting his jaw back up where it belonged.  “Okay.  Now.  What about the few, the proud, who HATE having to ask for help, who actually want and are willing to help themselves?”

“Western writer Louis L’Amour once wrote that ‘every time a man gets up in the morning he starts his life over . . . .  You can always start over, saddle a fresh horse, and take another trail.’  Regardless of past mistakes or how slow your progress seems, you’re always going to be WAY ahead of everyone who isn’t trying.  Now, if you’re planning on going back for another round of the same mistakes, that’s not progress.  That’s a fool’s errand.

“The value of mistakes is to learn from them and quit making them again.  C. S. Lewis wrote, ‘You are never too old to set another goal or to dream a new dream.’  At age 87, Michelangelo said he was still learning.  You’ll part ways with some of the herd.  But many times people leave your life because you did something right – not because you did something wrong.  You got tired of being manipulated and underestimated, stood up for what you know to be true and spoke the truth.

“Find a new batch of friends.  Surround yourself with people who care when you don’t, believe in you when you won’t, and reach out to include you when you feel unable to go on.  You won’t have as many surrounding you, but those with you will be worth knowing.  They’ll challenge you to grow, and let you challenge them to do likewise.  Your only limits on your life are those YOU set.  George Eliot said it:  “It’s never too late to be what you might have been.”

It got quiet again.  He could hear the steam rising from the now-burning coffee.

This week’s challenge?  Recognize the reality in this fictional dialog.  Interesting, isn’t it, that this interplay could have been between you and just about anyone.  Couldn’t it?

Oh, yeah, babe.  To speak like this will definitely cost ya.

But it’ll cost you a lot more if you don’t.  And it’ll cost them far more than they could imagine.

I love you, and I believe in you–