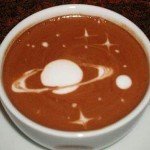 They were relaxing on two of the custom-built chase lounges in the Always-Ready Room.  Alert duty was just a way of life for Mike and Gabe.  From where the lounges were situated, the two veterans could oversee all the vastness of their respective areas of responsibility.

Mike had a pensive expression.

“Hey.”  Gabe turned his head toward his understudy, raising his eyebrows in silent response.  Forming his words thoughtfully, Mike asked, “What about all that down there?”

This time Gabe spoke:  “All what?”

“You know—all the unending griping about His influence in people’s lives,  chafing at His rules for living,   arguing about how He creates things and people—and why.  And that whole Cross deal.  I mean, like that strategy was ever gonna work, right?  Still—–”

Gabe looked at Mike for a minute.  “Nnnh.  Yeah.  You’re wondering why He puts up with it.  Right?”

Meeting his eyes, Mike slowly nodded, limitlessly powerful muscles shimmering in the light.  Gabe was quiet a minute, then went on.

“Well, you know He gets angry and does step in and act when He knows it has to be done.  I mean, you and I are constantly on missions of one sort or another because He’s intervening in someone’s life—and often without them even knowing we’ve been around.”

Gabe wagged his head in understanding.  “Yup.  And I’ll never forget Mrs. Hitler’s little son, Adolph.  And this bin Laden character?  Will his kind ever learn?  And dig this guy the Americans thought they wanted.”

“Reminds me a little of Saul.”  Cocking an eyebrow, Gabe nodded his agreement.

“Yeah.  You really would think humans would learn that when His Holiness has had enough it’d be smart to shut up and just do things like He says to do ‘em.  It’s not like they haven’t had plenty of chances to see what happens when they openly defy Him.”

Mike was still troubled.  “Well, um—isn’t He bothered by so many people He’s blessed in so many ways yelling about how He has no business having His name and teachings on buildings or on money or in their schools?  Doesn’t it hurt Him for colleges and universities that were begun as places to learn about Him to now demand that all mention of Him be tossed and His followers being publicly ridiculed and at times even denied access?  I don’t mean to be disrespectful at all, but this has me puzzled and I know you’ve been at this a lot longer than me.”

Gabriel smiled slightly, lying back on his custom-fitted chase lounge.  Pointing, he said, “See that?”

Michael followed Gabe’s finger and said, “Yeah.  That’s what humans consider to be the farthest known galaxy from their planet.  They call it Abell 1835 IR1916.  13 billion light years from where they are.  So?”

“So now look over there.”

Humoring the senior member of their celestial alert team, Mike dutifully picked out the object.  “What is this, quiz time?  That’s the farthest known planet to the earth dudes—OGLE-TR-56b.”  Now in a playful, singsong voice, Mike wagged his head back and forth:  “It whips around its star every 29 hours, is 50 times closer to it than Earth is to the Sun, has an average temp of 3,100 degrees and its clouds are formed by iron atoms.  Once again, SO?”  He fitted the earpiece to his iPod back to where he could listen.

Now Gabriel sat up, immense, towering over his reclining partner.  He poked a huge finger at Mike, who fakefrowned, whispering, “SSShhh.  Mannheim Steamroller…”  That earned him a smack on the shoulder.  “Okay, okay.  I’m listening.”

“Well, yeah, sure,” Mike agreed, swinging his own feet down, his ultimately powerful persona glistening and throwing off jagged shards of flickering light.  Knowing Gabe had a point, he waited.  Gabe pinned Mike with his lasering eyes that miss nothing.

“Yup.  Where that farthest galaxy stops, God’s deck begins.  Ain’t even got to His backyard, yet.”

Michael sat for a minute, pondering the vastness Gabriel was describing.  “Okay, Gabe.  I gotcha.  You’re saying that people who are so self-important on earth and who work so hard to make others disbelieve in His Holiness and actively deny His claims on His own creation don’t even show up as dust on His radar screen.”

Gabe narrowed his gaze:  “Only one thing left out—He loves those people just as much as those who love Him back, and it really tears at His heart to think they’d rather reject Him and lose all—“ and here Gabe swept a huge glowing arm across the unending panorama of glistening Light of Celestial Central— “this that He built just for them.”

Mike was quiet for a minute.  After all, this is the ultimate archangel, Gabriel—what a partner to have, from whom to learn.  This is THE dude of all Heaven’s angels.  Buffed beyond imagination.  He could hear the passion, the power of Gabe’s words vibrating the very place where they stood.  Whoa. . .

“Mmm.  Yeah.  Guess when you look at it from out here, there’s really nothing those anti-God whiners do or say that rates a sneeze, huh?  At least unless they choose otherwise.”  Gabe got a faraway look in his eyes, then whirled around, scattering a few thousand lesser troops hanging around to catch what these two All-Pro archangels were discussing.

He said, “And do YOU know what, my flyin’ friend?  You and I have THE best positions in all Creation!”  He tensed, crouching slightly, the effort causing Light to shift and flicker and change around him.

Mike got an eager glint in his eye.  “Time to fly?”

Your challenge for the week as we lead up to Palm Sunday?  Think beyond our Earthbound frame of reference.  There are some things we hold true, maybe even sacred that OUT THERE have little or no value whatsoever.  I’m suggesting we all start taking the l-o-n-g look at our pet ideas, notions and favorite ways of thinking.  It’s time to dump some of them; to, ah, sweep off the deck for some new ones more worthy of our time and effort.

It is impossible for us to see things from a God’s-eye view.  However, we can–must–stop thinking of everything and everyone as if ours is the only view.

It is not.  If you and I could see ourselves from Gabe and Mike’s perspective just once, we’d all blush at just how self-important and silly we must look from Out There.

Oh, yeah.  Those ‘chase’ lounges?  I just know somebody out there is feverish in wanting to correct the spelling.  Once again, look at it from OUT THERE.  If you had the job of trying to herd us and save us from ourselves, which way would YOU spell it?