i know His touch

Come on in and toss your foul-weather stuff on the couch.  I’ve a pot of freshly ground medium roast that ought to perk you up. 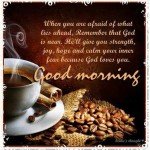 “Do you really think anything divine is happening when you pray?”

The question interrupted some quiet time.   It made me pause and think before answering.  Were the question an honest one, unbarbed, the answer could be plainly, simply stated.  What I heard from the guest who’d insinuated himself into my personal time was neither.  There are those whose smooth words always seem to hide a nasty treble hook.  This was one such, and not, I think, very well disguised.

There was ever-so-slight emphasis on ‘really’.  I was being played, pitied, my simpleness tolerated.

“Do you not?”  Whatever answer he’d primed himself to blow out of the saddle, that wasn’t it.  It was his turn to pause as he reloaded.

My office door had not been latched for I always make time in the morning for friends to drop by.     Most quietly nudge the door open and softly knock.  This one wasn’t most.  His entrance was intended to disrupt, his demeanor intentionally rude.  I was struck once again by the common tendency of persons such as this to draw attention to themselves, revealing a poor self-image–a trait they’d angrily deny exists, but which their responses only make more apparent.

“Opium of the people, yes.  I’d credit you with reading after Marx’s Critique of Hegel’s Philosophy of Right , but I’m guessing you’ve simply read a few quotations and fit them into your thinking.  Otherwise, you’d know that compact little quote is dishonest–at least as it defines religion.  If you read on, you’ll note Marx also named religion as “the heart of a heartless world”.

He sat and stared at me.  The remnants of his sneering, amused arrogance were still on his face like the leftover condiments from a scrumptious coney with chili and cheese.

“Let me save us both some time.”  I almost added, “May I” but on further consideration decided rudeness ought to at least call for assertiveness.

“You observed correctly that I was praying as you, ah, greeted me earlier.  It was not for anyone’s benefit beyond my own, although, as it turns out, it did involve you.”

Ah.  The famous slack-jaw of disbelief.

“Quiet time has been a lifelong habit of mine.  It’s my way of opening the curtain on the new day.  This morning I happened to be asking God to give me words of wisdom and encouragement for whoever came by today.  And that,” I said as I smiled, “would be you.”

The bravado was back.  “Yeah?  So what great wisdom do you have for me?”  As he said ‘wisdom’ he waggled his head to the right, shrugging slightly to make the point:  he expected none.

“Yesterday during worship I observed a young couple who’d asked one of the pastors to anoint the wife with oil and pray for her healing regarding some physical issue.”  I waited.

The sneer appeared.  “Oh, and I suppose she was miraculously healed on the spot!”

I couldn’t tell if it was a chuff or a chortle, but he was exhibiting some fine derision.

“There is something I can tell you.”  I don’t think he liked the intensity of my gaze or the lowered tone of my voice.

“I am absolutely certain that God heals today.”

“I know His touch!”  My heart, mind and spirit were focused as if being brought together by a lens.  I felt a vibration within my soul.  It was apparent in my voice.

“I’ve felt the Hands that molded galaxies touch my body, raising it from certain death to a new life I’d never have dreamed possible.  The same Hands that opened useless, blind eyes opened my heart to a new, intense love I’d never have otherwise known.  The same Hands that boldly touched and transformed the ugliness and rot of leprosy drew me in with a strong hug when my spirit was rotten and putrid from my own wilfulness and pride.  Those same Hands that lovingly held Death in them held me when men said nothing more could be done–and proved medical science and practice wrong.”

“So you ask if I believe anything divine is happening when I pray?  Well, my friend, I am LIVING PROOF of it!  I stand here (and I was! ) before you healed in ways that defy medicine; in ways that show HIS creative ability and limitless power!  It sure wasn’t due to anything I was or could do.  And ALL the glory, ALL the power, ALL the praise belongs to Jesus, THE Christ, THE Lord of my life and my coming King!”

I don’t know what his conclusions were; he left as quietly and abruptly as he arrived.  I know I felt energized in mind and spirit as I thought over that simple four-word testimony:

I know His touch.

Your challenge for the week?  Make room for God in your thinking.  Look around you.  You just may know somebody besides me who could look you in the eye and say it, too:

I know His touch.

I do, you know.  And it’s okay that I don’t have explanations or hypotheses.  I just know I’ve been healed in ways that make it clear:  God did it.  Not medicine.  Not science.  Not Physics, Meta- or otherwise.  Not the paranormal.  It was–is–God.

And it’s not just a one-time deal.  He keeps it up every day, reminding me again and again and again–His mercies, His healing, His blessings really ARE new every morning!

No.  I’m not trying to talk you into or out of anything.  You’ve a great mind; use it.  But neither am I shrinking away from telling this wonderful fact.  You want to ask Him to heal you?  Do it.  Just understand that God’s healing involves your mind and spirit and experience and environment just as much as it does your body.  Leave the means, the timing and the ways He wants to heal in His hands–and you’ll have the same unmistakable imprint, almost like a tattoo on your spirit:

I know His touch!